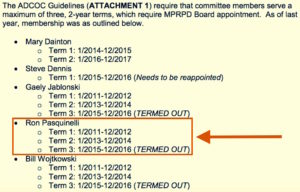 It appears the District staff attempted on February 8, 2017 to replace Pasquinelli and another termed-out member with with handpicked individuals selected by the General Manager and a Nomination Committee. But a member of the public objected to the appointments process:

Mary Dainton pointed out that the Assessment District Citizens Oversight Committee (ADCOC) Guidelines need to be updated and asked if a process could be established for the Board to question the ADCOC recommendations on the community grant program before a final decision is made. Mary Pendlay announced that she has submitted a letter of interest to serve on the ADCOC. Director Dalessio also asked staff to encourage ADCOC members to come up with community projects which could be funded through the grant program. Upon motion by Director Dalessio, seconded by Director Pofahl, Item 6-A was moved to a future meeting, allowing additional time for the Nominating Committee to meet and secure additional letters of interest to serve on the ADCOC.

On April 12, 2017 the board considered several candidates and appointed two people who were not the people recommended by the General Manager and Nomination Committee in February.

After discussion and upon motion by Director Lee, seconded by Director Pofahl, the Board unanimously approved the recommendation of the Nomination Committee and appointed Steve Dennis; Christina Fischer; Deborah Mall and Barbara Mastman to the Assessment District Citizens Oversight Committee. (Vote: 3-0)

In 2016 the Monterey Peninsula Taxpayers Association opposed Measure E, the ballot measure to establish a permanent property tax assessment to fund the district’s land acquisition and development. The strange case of the District’s 2017 appointments to the oversight committee confirms our unease about this tax.