UPDATE: The statewide bond and tax measure watchdog group Big Bad Bonds noticed something we didn’t: the indicia for the mailer sent by the Monterey Peninsula Regional Park District reveals the involvement of a political consulting firm. This firm was hired by the district board on January 5, 2015 for $35,000. On May 4, 2015, the district board increased the contract to $62,000. It would be reasonable to speculate that the expenditure for mailer design and implementation is paid for through this contract.

Approval to Amend Contract with TBWB Strategies to Include Public Opinion Polling Services – May 4, 2015

These agencies claim their promotions are informational or educational because they don’t explicitly tell people how to vote. The California Attorney General’s office recognizes how governments exploit ambiguities in election law. As it states in one of its opinions about bond measures, “Courts have repeatedly noted the difficulty in drawing a bright line in distinguishing between what is a proper and an improper expenditure of public funds in connection with election activities.”

This is an advantage for governments, which have a ready pool of money collected from taxpayers or ratepayers to spend on election activities. Meanwhile, private parties who wish to oppose the bond or tax measure must obtain money for election activities through voluntary donations obtained through high-regulated fundraising.

What can be done about this brazen stretch of the law? The Monterey Peninsula Taxpayers Association can submit a complaint to the California Fair Political Practices Commission (FPPC) or even file a lawsuit against the Monterey Peninsula Regional Park District. But the damage is done. The campaign message is out and the district used taxpayer money to do it. Any subsequent campaign activity funded by voluntary donations under the authority of the California Election Code is icing on their cake.

Do you think this mailer (below) from the Monterey Peninsula Regional Park District provides a fair, impartial assessment of the proposed tax? Or do you think it encourages voters to support it?

Contact Monterey Peninsula Taxpayers Association board member Kevin Dayton at (916) 439-2159 if you are concerned about this clever scheme by the Monterey Peninsula Regional Park District to use taxpayer funds to promote a tax measure on the November 2016 ballot. 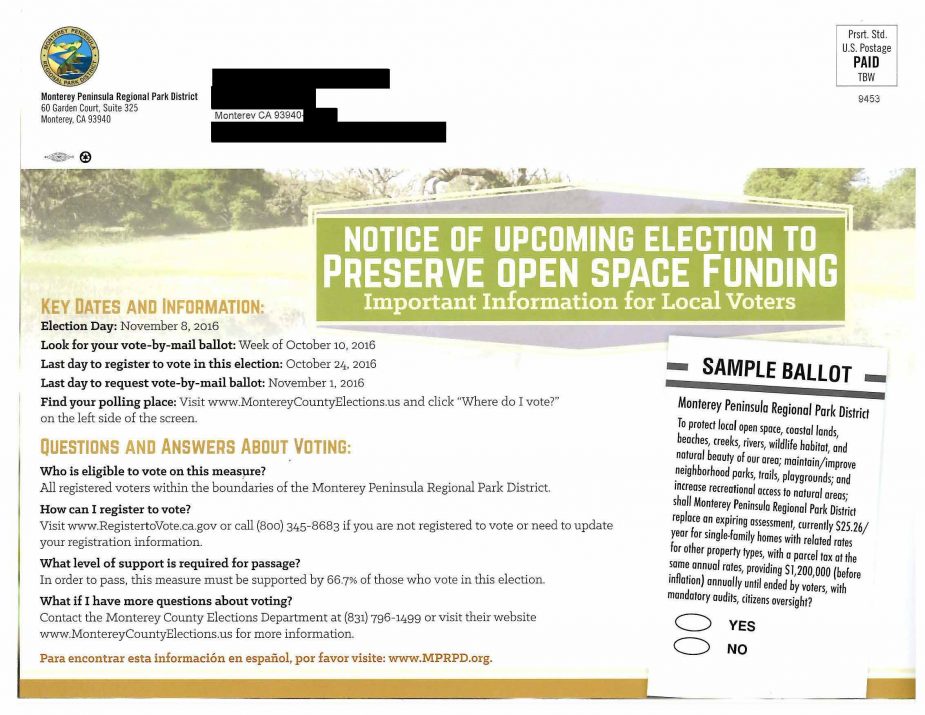 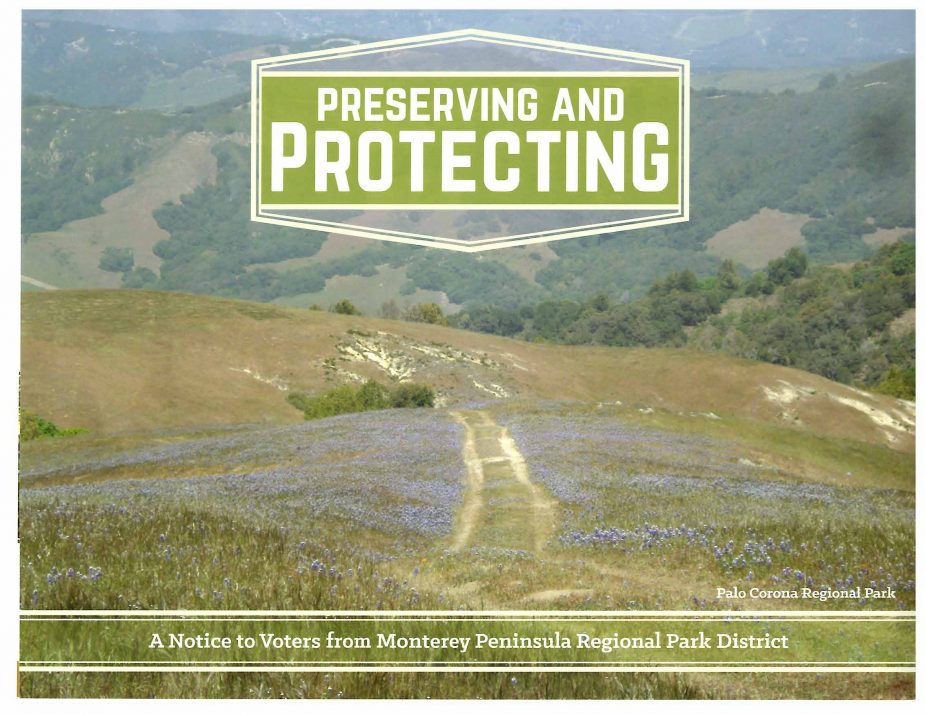 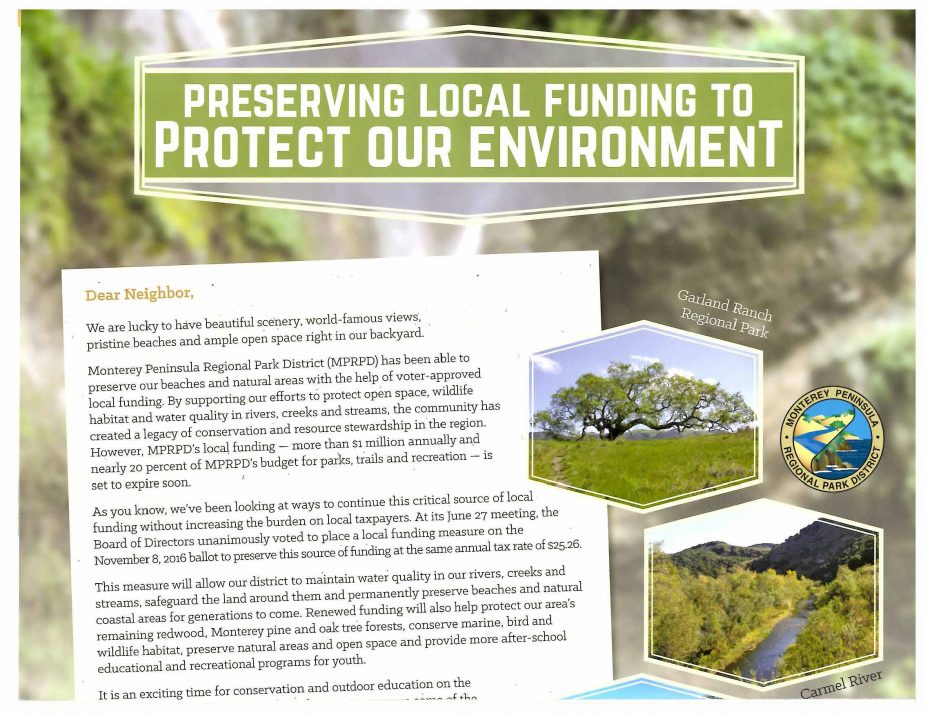 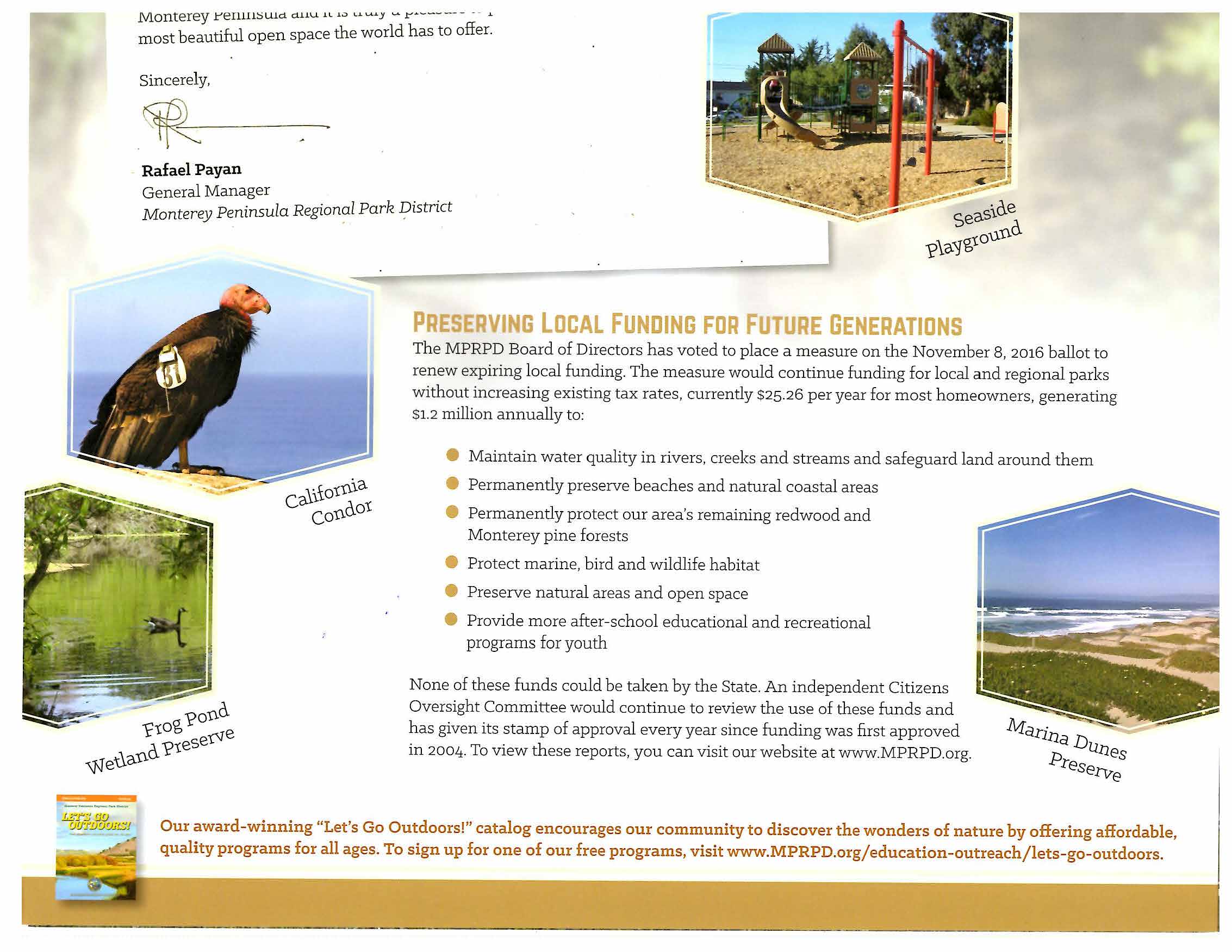